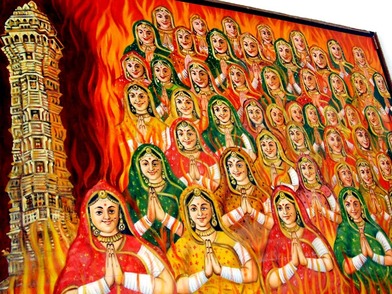 According to Enthoven the original habitat of the Bhatia’s appears to have been the Lahore and Multan district of Punjab (now in Pakistan) where once there were considerable numbers.

“As regards their southward movement Tod mentions that in the eighth century, The Yadu Bhati were driven south of the Sutlej. But it would seem from the third expedition (AD 1004) of Mahmud of Ghazni that there was still a small kingdom of Bhatia at Bhatia or Bherah on the left bank of the Jhelum near the salt range. And it was probably by the later Muhammadan invaders that the Bhatia were driven south into the desert and Sind. In Sind, some of the Bhatias still eat fish and drink spirits. Probably most of them have settled in Cutch and Kathiawar since the establishment of Jadeja power (circa 1350 A.D.)”
The tribes and castes of Bombay - Enthoven - 1922

Sultan Mahmud of Ghazni planning the expansion of his Kingdom eastwards in AD 1000 attacked Hindustan. He defeated his father’s old antagonist Jeipal of Lahore near Peshawar and took him prisoner. He released the Hindu prisoners for ransom on Jeipals renewing of promise for tributes. Jeipal on his return from captivity, worn out by repeated disasters, and perhaps constrained by some superstition of his subjects, made over his crown to his son Anang Pal; and mounting a pyre which he had ordered to be constructed, set it on fire with his own hands, and perished in the flames.
Anang Pal was true to his father’s commitments; but the Raja Biji Rai of Bhatia near Multan refused to pay his share and resolutely opposed the Sultan. Therefore in AD 1003 Sultan Mahmud attacked Bhatia.
Read this excerpt from “The History of India, as Told by Its Own Historians. The Muhammedan Period.” By Henry M. Elliot, Dowson -1869.
When Sultan Mahmud had settled the affairs of Sijistan, and the action of his beating pulse had subsided, and the clouds had dispersed, he determined upon invading Bhatia. So he collected armies with trustworthy guides and valiant standard bearers, and crossing the Indus in the neighbourhood of Multan, he marched towards the city of Bhatia, the walls of which the wings of the eagle could not surmount, and which was surrounded as by the ocean with a ditch of exceeding depth and breadth. The city was as wealthy as imagination can conceive in property, armies, and military weapons. There were elephants as headstrong as Satan. The ruler at that time was Biji Rai, and the pride which he felt in the state of his preparations, induced him to leave the walls of his fort and come forth to oppose the Musulmans, in order to frighten them with his warriors and elephants and great prowess.
The Sultan fought against him for three days and nights, and the lightnings of his swords and the meteors of his spears fell on the enemy. On the fourth morning a most furious onslaught was made with swords and arrows, which lasted till noon, when the Sultan ordered a general charge to be made upon the infidels. The friends of God advancing against the masters of lies and idolatry with cries of “God is exceeding great!” broke their ranks, and rubbed their noses upon the ground of disgrace. The Sultan himself, like a stallion, went on dealing hard blows around him on .the right hand and on the left, and cut those who were clothed in mail right in twain, making the thirsty infidels drink the cup of death. In this single charge he took several elephants, which Biji Rai regarded as the chief support of his centre. At last God granted victory to the standards of Islam, and the infidels retreated behind the walls of their city for protection. The Musulmans obtained possession of the gates of the city, and employed themselves in filling up the ditch and destroying the scarp and counterscarp, widening the narrow roads, and opening the closed entrances.
When Biji Rai saw the desperate state to which he was reduced, he escaped by stealth and on foot into the forest with a few attendants, and sought refuge on the top of some hills. The Sultan despatched a select body of his troops in pursuit of them, and surrounded them as a collar does the neck; and when BijiRai saw that there was no chance of escape, he drew his dagger, struck it into his breast, and went to the fire which God has lighted for infidels and those who deny a resurrection, for those who say no prayers, hold no fasts, and tell no beads.—Amen.
The army of the Sultan kept moving on, and committing, slaughter and pillage. One hundred and twenty elephants fell to the share of the Sultan, besides the usual share of property and arms. He also obtained an accession of territory, without any solicitation. He remained at Bhatia till he had cleansed it from pollution, and appointed a person there to teach those who had embraced Islam, and lead them in the right way. He then returned to Ghazna in triumph and glory, and his fortune was in the equator (ascendant); but as his return was during the rains, when the rivers were full and foaming, and as the mountains were lofty, and he had to fight with enemies, he lost the greater part of his baggage in the rivers, and many of his valiant warriors were dispersed. God, nevertheless, preserved his person from those calamities which beset his road, for God is the friend of the virtuous.
“As regards their southward movement Tod mentions that in the eight century, The Yadu Bhati’s were driven south of the Sutlej. But it would seem from the third expedition (AD 1004) of Mahmud of Ghazni that there was still a small kingdom of Bhatia at Bhatia or Bherah on the left bank of the Jhelum near the salt range. And it was probably by the later Muhamadan invaders that the Bhatia were driven south into the desert and Sind. In Sind some of the Bhatias still eat fish and drink spirits. Probably most of them have settled in Cutch and Kathiawar since the establishment of Jadeja power (circa 1350 A.D.)” The tribes and castes of Bombay - Enthoven - 1922

Based on research in the Russian colonial archives and the Office of the Bukharan Khushbegi, the Russian historian G.L. Dmitriev suggests that the majority of the Indians present in Central Asia in the colonial period were Bhatia’s, a merchant caste associated with Sind, especially the area around Multan, since the seventh century.
In the nineteenth century, many Bhatia caste members were located in the north-west frontier town of Dera Ismail Khan and were known to have travelled to Kabul, Bukhara and even as far as Arabia.
Ibbetson reported that, in the nineteenth century, the Bhatias were numerous in Sind and Gujarat, but that their region of origin appears to have been Bhatner, Jaisalmer and Rajputana. Wink also notes that, ‘there was a close connection between the Bhattıˆs or Bhaˆtıˆs of Maˆda (modern Jaisalmer district) and the Caulukyas of Gujarat in the mid-twelfth century.’ In an effort to locat the Bhatia homeland, Anthony O’Brien establishes the presence of the Bhatia as a community ‘in or adjacent to Sindh fromthe 7th century onwards.’ This is supported by a reference in the Chachnamah to the king of Batiah in eighth-century Sind.
As noted above, the Bhatias were established in Sind even prior to the thirteenth century, when many of them converted to Islam under Firuz Shah Tughluq. Wink 1997: 231-2. According to Russell, however, in the nineteenth century, those Bhatia merchants whose commercial interests led them abroad were exclusively Hindu.
Bhatti Rajput ruler Rawal Jaisal, after whom the city finds its name, founded Jaisalmer in 1156. On advice of a local hermit Eesaal he chose the Tricut Hills as his new abode abandoning his vulnerable old fort at Luderwa just 16 kilometres northwest. In Medieval times, its prosperity was due to its location on the main trade route linking India to Egypt, Arabia, Persia, Africa and the West. The Bhatti Rajput rulers lined their coffer with gains from traditional taxes on passing by caravans and sometimes through illicit gains by rustling cattle.
Over the years the remote location of Jaisalmer kept it almost untouched by outside influences. In the 13th century ( AD 1295 ) Ala-ud-din Khilji Emperor of Delhi besieged the fort for nine years in an effort to take back the treasure taken by the Bhatti Rajput from his imperial caravan train. When the fall of the fort was imminent the women of the fort committed Jauhar, an act of mass self-immolation, while men donned saffron robes and rode to their certain death. Jauhar and Saka refer to the ancient Indian tradition of honorary self immolation of women and subsequent march of men to the battlefield (against any odds) to end their life with respect. It was followed by the Rajput clans in order to avoid capture and dishonour at the hands of their enemies. 24,000 women committed Jauhar, most on a funeral pyre though some were killed by the swords of their male relations when the pyre proved too small. The men 3,800, in number then threw open the gates of the fort and advanced to their death. For some years afterwards Jaisalmer remained abandoned before the surviving Bhatis reoccupied it.
After the defeat at Jaiselmer the surviving children and elderly who had escaped into the desert before the siege settled in parts of Multan and Punjab. They gave up their Kshatriya life of warfare and  became traders and farmers.
​

The history of Kutch is very old. Traces of the Indus valley civilization (3000 to 1500 B.C.) have been discovered at Dholavira – Kutch. Kutch district (also spelled Kutch or Kachchh) covering an area of 45,652 sq km (nearly 23000 sq km is desert) is the largest district of Gujarat state in western India. Kachchh literally means something which intermittently becomes wet and dry; a large part of this district known as Rann of Kachchh is shallow wetland which submerges in water during the rainy season and becomes dry during other seasons. Around the month of October the expanse starts to dry up leaving behind white crystals of salt. A white salt desert. The administrative headquarters is in Bhuj which is geographically in the centre of the district. Other main towns are Gandhidham, Rapar, Nakhatrana, Anjar, Mandvi, Madhapar and Mundra. The language spoken predominantly in Kutch is Kutchi language, to a lesser extent Gujarati, Sindhi, and Hindi.

It is thought the original inhabitants of Kutch are the nomadic pastoral tribes of Kathi, Ahirs and Rabaris. Though sparsely populated there always have been migrants in and out of Kutch. In the eight century Kutch was overrun by the Chavdas pushing the Kathis into Kathiawar. In the tenth century from the east came the Solankis and from the north came the Sammas, Sodhas and other tribes pushed south by the Muslim invasion. In the twelfth century came the Vaghelas from the east, and from the north came Sammas and Jadejas until their final conquest in the fourteenth century. Of the castes, Brahmans and Vania’s came from Marwar and Gujarat. Bhatia’s and Lohana’s from Sind and  Multan.
A brief history of Bhatia settlements
​ on the Globe. 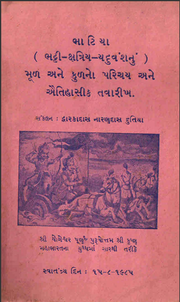