BHATIA MAHAJAN
Please check back often since the website is still under construction and constantly being updated.
<
> 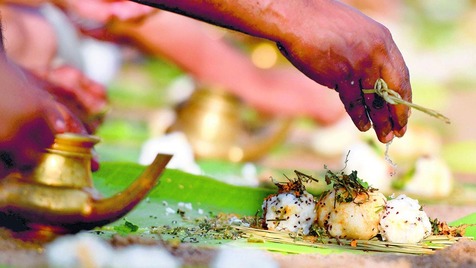 ​Meaning and Origin of Shradh

In Hindu Panchang, Pitra Paksha is observed from the 1st Tithi of Ashwin Maas until New Moon day (Amavasya). The entire 15-day period is also known as Pitri Pokho, Sola Shradha, Kanagat, Jitiya or Apara Paksha. During this time, the Shraddha or Tarpan of the ancestors is performed on the day they met eternity.

What is the purpose of Shradh?

Hindu mythology states that the soul wanders through various worlds after death. Shraddha is performed during Pitra Paksha to appease the departed ancestors. It is a ritual to repay debts to the ancestors. According to beliefs, Shradh rituals help ancestors find salvation or moksha.

What is the story of the origin of the Shradh?

​Yudhishthira asked the same question to Bhishma in Mahabharata,
Then Bhishma told him about a Rishi Atri whose son Dattatreya was the father of Nimi, whose son was Shrimata. Shrimata passed away before his father. So Nimi performed purificatory rites, invited seven Brahmana, and offered them food; by mistake, he offered food to his dead son. After that, Nimi was filled with regret because no one had ever performed such a ritual. When he called Sage Atri, he was told he had done the right thing.

During Pitru Paksha, Hindus fast, and many devote their time to ancestral worship or donating food and money to their local priests.

The shraddha is performed on a specific day during the Pitru Paksha (Tithi), which is determined by the place, month, date and the time the person passed away. Exceptions are made to the Tithi rule for people who die in a particular manner or have a certain status in life. During Chautha Bharani and Bharani Panchami, the fourth and fifth lunar days, people who have passed away in the past year are remembered. The ninth lunar day, Avidhava Navami, is dedicated to married women who died before their spouses. You can ask your priest to determine the tithi, or some websites have online calculators.

How Is Shradh Performed?

Usually, the eldest male member of the family or the eldest son performs the shradh puja. The puja begins when a priest comes home to perform a havan. After the havan, rice is offered to the departed souls, followed by food for the priest. Nowadays, people send food and donations to Brahman families they know.

In conclusion, the puja concludes with daan and Dakshina for the priest and the needy. A portion of the food is also offered to crows, dogs, and cows. If the date or tithi of the deceased is unknown, then the shradh ceremonies are performed on Amavasya, the last day of shradh.

Pind Daan is a duty that every child needs to perform for his deceased parents. A priest performs Pind Daan, and a food ball made of rice and wheat flour is offered to the departed souls. It is believed that after completing the Pind Daan, our ancestors achieve moksha.

Crows are believed to be the avatars of deceased souls who come to earth to seek food and water. Feeding them is like feeding our ancestors. Another belief is that crows are messengers to 'pitri loka' (the land of the deceased). Ants are also offered food in shradh puja. Feeding sweet food to ants is considered auspicious and brings the blessings of our ancestors. Dogs are believed to guard the doors of heaven and hell, and feeding a dog is an auspicious deed. Cows have already been given a significant status in the Hindu religion, and feeding them during shradh is considered auspicious. It is believed that only after feeding the Brahmins did our ancestors accept the food and water, so if you have missed this part, then the puja is incomplete.

The Bhatia Association UK annually conducts Bhajans in memory of our dear departed souls on one Sunday during Shradh.